Gold from the river.

The remains of two gold dredges lie in the river right at the end of the property.  One, the Lady Ranfurly Dredge was the most successful of all time.  She worked quite a short stretch of river right here.

The view from our back gate is across the river to the vineyards of Felton Road.  When the Lady Ranfurly had done it's work it was left on the river bank right in the centre of this picture.  In 1992 it was covered by the water of the raised Lake Dunstan.  The Lady Ranfurly lies there still.

To the left of this photo, now also under water, lies the Molyneaux Dredge, abandoned in 1942.
There are massive amounts of gold still here, although that in the bottom of the river is now gone.  Well maybe

Our back gate, and the drive down to the river was the supply point for the dredge.
The amounts of gold recovered by these machines, coal powered, with only a crew of half a dozen men was incredible.

In the week of 7 July 1902 The Electric Gold Dredging Company's Kawarau River dredge, Lady Ranfurly, won 1,234 ounces of gold. Here the dredgemaster, several dredgemen, the manager and ledger-keeper of the Cromwell Bank of New Zealand and a shareholder, Mrs G. H. Stephenson, look at the week’s haul. 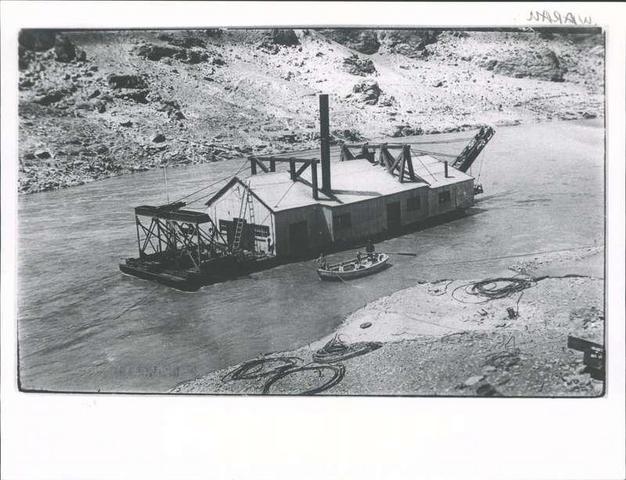 The Lady Ranfurly continued on until 1918 as the returns diminished.  Then she was hauled out and left.

The Molyneux was much later.  Built many kilometers downstream at Alexandra.  It was a marvel of technology and had all that it should have.  Strangely however it was moved and moved upstream to Bannockburn in little more than a year.  The locals shook their heads.  "To fast, they need to settle down and work their patch and they will find the gold."  But alas that was not what happened.
If any of the cables had parted.  What a mess that would have been.

After about 50kms of river, and a far too hasty an exploration the Molyneux was abandoned.  Probably the promoters had burned through all their cash.
So it goes.  The worlds most successful gold dredge "The Lady Ranfulry" reduced to a few scraps of steel and timber.  And one of the most sophisticated dredges made, "The Molyneux"an abject failure.


*****UPDATE
But the human spirit springs eternal.  Recently, about 100 years after the peak of the lady Ranfurly success there is another dredge on the river.  About 80 kilometers downstream someone else is giving it a go.  The "Cold Gold' dredge started up for about six months ago.  Then ceased for modifications and now is back in operation.  It seems to be using a suction technique rather than buckets.    It's not a huge multinational, but you don't run a labour and fuel intensive dredge like this cheaply either.

They are still there, so they must be doing ok.  But as with all who follow the fascination with gold.  They are not saying much.

End
Posted by The Field of Gold at 3:52 PM
Email ThisBlogThis!Share to TwitterShare to FacebookShare to Pinterest
Labels: Gold from the river

I would love to hear from you on any of these posts. This blog is not daily news and I will respond to comments even on backdated posts.

The Field of Gold
Wherever I look there is only beauty and a vast astounding landscape. The gold rush left a history etched into the ground here, followed by a century of solitude. Now this field is entering it's second phase history with trees and visual design. This blog is not daily news, posts are programmed for once every ten weeks. The big story that is Central Otago is best appreciated looking at all the posts listed.